skip to main | skip to sidebar

Now I've blogged about Dubai a few times before. So what's new this time?

Well, today we're here at night. It's just past midnight local time, and the heat and humidity are unaffected.

Also, due to some renovations at Dubai International, we're at Dubai World Centre - a sort of outer airport, like Avalon or Tooradin. It seems to have a lot more room to grow than the main airport - or that might just be that it doesn't already have a shopping centre the size of Chaddy+Eastland+Highpoint built in.

The WiFi here is good, but requires us to sign up, and pay for it once we've had half an hour. Why do people bother? They don't even make us visit our email and pick up a confirmation code, so mailinator.com must be absolutely spammed with people creating a new account every half hour. Anyway, it lets us get online. Afterthought: it must use cookies, because when I'm in incognito mode it has no idea that I already exist... deleting the cookie is an option I guess but Ctrl-Shift-N is easier.

Midga decides to visit a coffee vending machine. Anyone would think he was at work and waiting for SAP to do something... I have no idea what the exchange rate is, but apparently an Australian 20c coin is an acceptable substitute (Lord High, of course) for a One Dirhan coin. 60c later he has a cup of coffee!

This is just a technical stop, so we were allowed to leave our luggage on the plane. I came ashore with them of course, to pick up some more power and have something to blog about.

For some reason the gate opens 90 minutes before departure time, and almost all the passengers get up and go through straight away. There's more room in the waiting area but for some psychological reason people prefer to be one step ahead while they're waiting. Maybe it breaks up the waiting time too. Anyway, we have a seat and we still have WiFi so it really doesn't matter (matter matter matter matter) where we sit.

That's really all there is to tell about this stop. But one more thing about the 787 (just one, this time). Midga was standing up in the middle seat (it's 3+3+3 in economy) and could stretch up on tip toes without bumping his head on the luggage bins. This plane has been designed for tall people. Isn't that lovely?
Posted by Michael Angelico at 7:20 AM 1 comment:

Brunei Darussalam airport is currently under renovation, so there's very few power points around. Midga eventually finds one a long way from any kind of seating, which is a pain because Asha is sore and doesn't feel like sitting in the floor. I have one hour to absorb as much power as I can. Shame I can't harness the power of the security x-ray...

There's also no WiFi, which is a bit of a pain, but ah well. We have a stop at Dubai before we get to London so we'll try again there.

Our approach was excellent, I was expecting some humidity related turbulance but there really wasn't anything to speak of. The pilot put the nose wheel down so gently I hardly felt it, and the main wheels weren't bad either. Disembarking was the usual slow process, I wish business class pax could be as prepared as we always are.

Asha is sitting on a massage chair trying to get rid of some of her aches and pains. And playing games on her phone of course - she was able to charge it using a USB port on the in-flight entertainment unit on the plane. Incidentally, apart from the lack of power points they also had very poor touch screens. Fortunately the software problems we usually see on Emirates 777s were just not there - response was fairly quick and all the functions just worked as expected.

A lady just came up to "our" power point and tried to plug an American phone charger into a British power point. It didn't really work. Midga offered her a USB cable to charge off my port, and then another passenger offered her a British USB charger from his iPad. Comradeship is born out of alliance in pursuit of a common goal, and the goal of recovering from a 5% battery charge and getting onto Facebook is one of the most common in the world.

In closing I will just give a shout-out to the power points that were located very conveniently near our departure gate, but were very inconveniently not working: 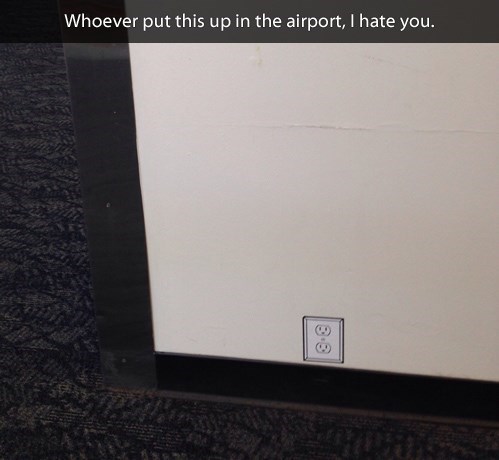 The Angelico Austrian Adventure - flying out

Welcome, one and all, to Clippy's Log! Having chronicled all Midga's overseas trips as a single bloke, how can I not do the same for his honeymoon? After all, I announced his attachment to Asha, which is almost as good has having brought them together.

So here goes. The humans woke up this morning at a totally un-Saturdayish hour, and proceeded to do most of their packing. Rosuav is looking after my British plug adaptor, which is a shocking oversight on Midga's part, but Asha is a seasoned traveller and has plenty of electronic gear. I was already packed of course, but my case had been lightened by removing everything not required for an overseas trip.

They then took a casual stroll across the road to the centre of the universe, Southern Cross Station. Actually they went to the off-centre, not the centre - the bus terminal where Skybus lives. Just as they approached a 14.5m three axle rigid departed, but we weren't worried - Skybus runs every ten minutes, rain, hail or shine. And the next bus in line was an artic!

They bought tickets and boarded, selecting seats just past the articulation for best effect. The bus filled quite comfortably - most of the seats were occupied. There's no doubt that good frequency draws more patronage than $30 return fares drive away.

We went out past the Dudley Street carriage yards, looking closely at the H cars to see if they had rusted into the ground yet. Apparently not. There was also a three-car V/Locity in the original purple livery, which is becoming a rare sight. According to Vicsig one's already come out in PTV spots (come out in spots, like a disease, geddit?) and I guess the last purple cars will be the first ones to get stickered.

In Dudley Street itself we were held up by traffic. It initially looked like a semi-trailer was trying to back into a very narrow alley, but by the look of a slightly shop-soiled car and broken glass all over the road I suspect some idiot got under the truck's heels and the truck jack-knifed trying to stop too fast. And it was right over both eastbound lanes too... Our bus driver seemed to have no trouble at all threading a needle with a bendy bus though - thank goodness it happened at a spot where the traffic island was only a painted one.

So we got to the airport in 22 minutes. I completely fail to see how an airport rail line can offer better service than Skybus does.

At the airport the humans realised they'd forgotten to do the online check-in, but the line was moving quite fast anyway and they had enough time. The process of getting through the airport is one I'm getting used to - x-rays don't hurt all that much any more. As we approached the gate we saw the shapely yellow tail of our ride for today. It's a 787.

Now just in case there are any new Log listeners today, I have to tell you about Midga's thoughts on the 787. To put it mildly, he adores them. They saved Boeing Commercial Airplanes from the chopping block, they employ all sorts of amazingly geeky technology, and they're built with the customer in mind, not the shareholder. So when he found out he was flying on one, he was slightly excited.

We got on board and the interior looked quite familiar. I guess all international-configured widebody aircraft have the same basic layout. The luggage bins seem a bit better in the capacity department, the interior lighting gives an impression of space, and the windows are huge. We're sitting in the middle section but we can still see out without much trouble. And the electronic dimming thing is so cool! I don't know how well it'll keep out light when we want to sleep but for softening the glare off the cloud layer without blocking the view it's amazing. Quite possibly the 787 is going to join that exclusive club of Items That Were Hyped Big And Then Lived Up To Or Exceeded The Hype. There aren't many members of that club, in all modesty. In point of fact I am the only member so far.

The humans have eaten (they seem to do a lot of that), and Midga has finished watching Need For Speed. It wasn't the one with the bus jump the Mythbusters tested, which is disappointing, and the "hero" spent a lot of time on the wrong side of the law. Still, he rescued his enemy from a burning car, so it's not all bad. The main value of the film is in picking holes in the science - but that can be said of most action movies.

The only other thing worth watching on the in-flight entertainment is a documentary about the invention of mobile phones, which includes the way a Hollywood actress came up with the idea of frequency hopping to avoid interception and an electronics geek who invented the camera phone by connecting an early digital camera to an early mobile phone with speaker wire while his wife was in labour, because he wanted to be able to email around the photos of his daughter without waiting til he got home. Ah, geeks.

The staff here are fairly constantly bringing around drinks, so it's hard to tell if the extra humidity they can put into a carbon fibre plane has made a difference. But the pressurisation certainly has - the water bottle trick isn't nearly as violent as it is in a 777.

Right now my battery is running low because Midga forgot to charge me last night. And there's no power in the seats for some reason. Ah well, we're already past Darwin so we'll be landing in Brunei in a few hours. Hopefully there's WiFi as well as power. Midga is snoozing, maybe he has low battery too?
Posted by Michael Angelico at 6:26 AM 2 comments: